An Insider’s Look at the Returns on 3 Multifamily Deals

When it comes to investing, as with many of life’s major paths, it’s easy to look back and see the best choices, what should have been done, and what would have been a smart decision. Harnessing the ability to thoroughly understand your financial situation, identify actual financial goals, and commit to a plan of action are all easier said than done.

By looking at the past performance of three multifamily real estate investment projects, how much they returned to investors, and the impact they’ve had in their respective communities, it might help you understand what real estate syndications could add to your portfolio.

Keep in mind that, although these are based on actual projects and data, some identifying information has been adjusted to protect the privacy of the deals, partners, and investors. 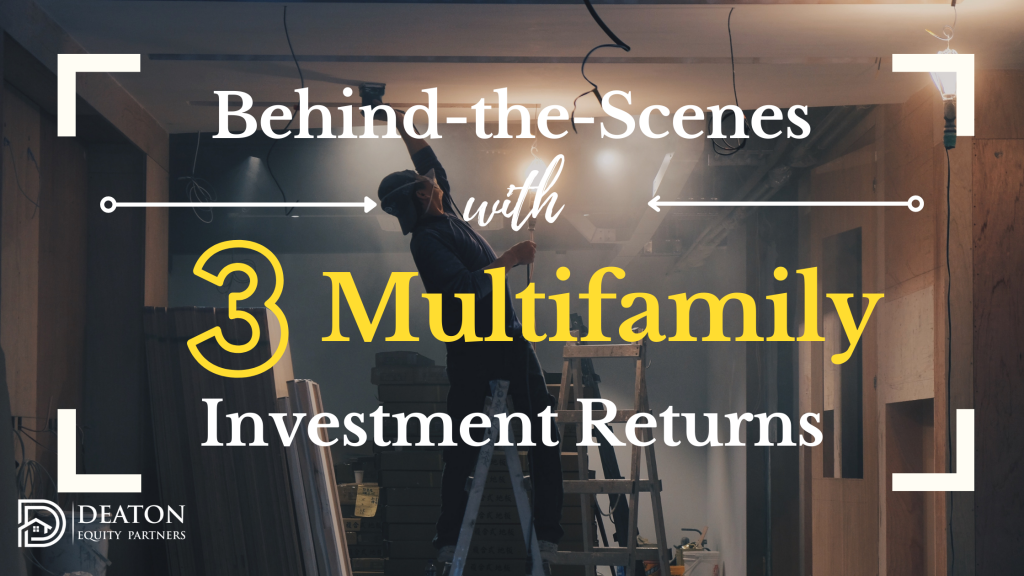 In May of 2016, a 320-unit apartment was acquired for $26.6 million. The class B apartment community was built in ‘83 and in a rapidly growing submarket of DFW (in Texas).

The business plan included on-site operations improvement and renovations for each unit for a full value-add deal. Upon acquisition, a professional property management team was placed. They maximized operational efficiencies and executed each phase of the business plan beautifully.

Within 18 months, the renovations were completed, and, since the market was favorable, the team sold the property for $35.2 million. This means by the time the property sold and everything was finalized, which actually took 22 months total, they’d exited the value-add real estate syndication with a profit of $8.6 million dollars.

What does this mean for investors?

Let’s pretend you’d invested $100,000 into this particular deal as a passive partner. You would have wound up with $170,000 in less than two years from your initial investment date. 70K profit in 22 months with zero work? Yes, please!

Our next example is also in DFW but only had 216 units and was built in ‘81. Although dated, it was a nice class B asset in a growing submarket of the metroplex.

One key difference between this example and the last one is that this apartment complex hadn’t been publicly listed. It was acquired off-market because of a partner/broker relationship established prior. They had a great track record and were able to make a quick, favorable deal without the challenge of competing against other potential buyers.

For $12.2 million the deal was done. The team rebranded and repositioned the property and invested several thousand per unit for renovations.

In just 18 months, the property sold for $18.25 million. They exited this particular real estate syndication deal with an over $6 million dollar profit.

If you were an investor in this deal with a $100,000 buy-in, you would have exited the deal with $200,000 just a year and a half later. I don’t know many places you can double your money that quickly.

Our third example is a more current project that was acquired off-market in December of 2017 for $16million. This 200-unit apartment community, also a class B asset, is in the DFW area like the others examined in this article.

Since it’s an ongoing deal, let’s dive a little deeper and study the progress.

By then 38 units had been remodeled and new rental rates were $20 more than original projections. So, basically, the project was ahead of schedule – both renovations-wise and rental rate-wise, which is what you want to hear!

And $20 per unit might not sound like much, but when you talk about raising the rent per unit not only to a projected value, but $20 more than that??!!  Well, it really adds up!

Other projects completed within the first 6 months included an outdoor kitchen, a new dog park, rebranding with new signage, and construction of over 40 carports. That’s some serious progress!

Renovations continued to run smoothly and new units were achieving rental premiums beyond projections. In fact, as a result of the increased rental rates, investors received an additional 2% in returns this month.

This property and the team continued to outperform projections. In fact, within the first year, we experienced a 26.4% surplus which will allowed a refinance deal to go through at the end of the month.

That’s exciting news because, with these kinds of numbers, investors received 40% of their capital back while still maintaining the same cash-on-cash returns based on the original value invested.

What that means is the property is performing so well that the team is okay pulling some of the originally invested capital out of the project.

If you’d originally invested $100,000, not only would you have been receiving your $667 each month, plus the $2,000 bonus back in December, but now you’d have received a check for $40,000 of your original investment back with no change to your monthly returns.

Renovations including eco-friendly toilets and showerheads were completed on 135 out of 200 units. Not only did the renovated units rent for an astounding $80 over projections, but we saved lots of cash on the overall utility costs for the property.

All renovations necessary to complete the value-add process were scheduled for completions in just a few months. At that point, the team will either choose to sell or hold the asset until market conditions are most favorable.

Either way, this real estate syndication deal has been a huge success already, and residents and investors alike are both very happy.

The number one thing holding back potential investors is syndication education.  These real estate syndications sound great and you see peers making great returns, but it can be super scary to invest your own $50,000 or $100,000.

Self-education toward understanding real estate syndications can be time-consuming and require a lot of energy upfront before you feel comfortable. The case studies here are all real projects that we and our partners have been a part of. None of the returns or the performance of the projects have been fabricated.

What can you do today, that your future self will thank you for? Investing in your financial education is one of the best ways to jump-start the progress toward your success two, five, or ten years from now. Look back at the deals mentioned here. Within 2-3 years the amount of income these investments have generated is absolutely impactful, to anyone’s life.

In addition to the ideas just presented, you can amplify your journey with the following resources:

This may be a good place to introduce yourself and your site or include some credits.